The Center is bringing the classics to our next Presenting Series performance! Schola Antiqua is one of the country’s greatest early music choral ensembles, and they will be bringing their brilliant exploration of the music of Renaissance Prague to the Center on Sunday, February 23.

“Slavic Routes: Music from Renaissance Prague” explores the secular and sacred music of the crossroads of the Northern Renaissance and its explosive religious and artistic atmosphere. We asked Michael Anderson, the artistic director of Schola Antiqua, questions about the ensemble and upcoming performance.

What is your vision for Schola Antiqua?

Our goal is to present music of the ancient past and educate the public about it. We specialize in a wide range of music from the Middle Ages and Renaissance, even some 17th-century music. In addition to teaching the public, we also are students ourselves, using research to inform our decisions about music-making, of which there is much the further back you go in history.

From where do you derive your artistic inspiration?

From a few places. On one hand we are driven by pieces that have not received a modern recording or are rarely heard in modern performance. It’s not too hard to perform “greatest hits” of the Middle Ages and Renaissance but even those are not heard in performance much. We also discover repertoire – familiar and unfamiliar – around themes for our programs, which sometimes emerge from recent research in the field of musicology. Research may inform one element of our program, so we supplement with new material sometimes from other centuries to show breadth.

“Slavic Routes” is a good example of a program that arises from recent scholarly studies … We worked together to select a mix of monophony (unison songs) and polyphonic, choral music that can paint a picture of the kinds of music one could encounter in Renaissance Prague.

What’s the farthest that Schola Antiqua has toured?

We made our international debut in 2019 at the Perimeter Institute in Waterloo, Ontario, Canada, a leading center for scientific research in the area of theoretical physics. Who knew that a science institute had an arts series, let alone interest in medieval and Renaissance music? The tour stop was one of our most rewarding; our green room had math equations on large chalkboards and pictures of one of its distinguished guests, Stephen Hawking. The scores of scientists in the audience were really curious about our music!

How long does it take to learn a new piece of music and how often do you rehearse before a show?

We usually only need a week or so. We send our music out weeks in advance for the performers to learn. They prepare on their own, arriving at our first rehearsal with a good sense of what they will contribute. We then polish the music as a group in long rehearsals leading up to a concert, also considering how to stage the work. Too many groups just stand in a conventional order and sing out. Because our culture is so visually oriented, we are trying to think more about creative ways of presenting our work.

What is the inspiration behind “Slavic Routes: Music from Renaissance Prague?”

“Slavic Routes” is a good example of a program that arises from recent scholarly studies. We asked Professor Erika Honisch of Stony Brook University in New York to develop this program for us from start to finish. She is a specialist in this period and geography, with examples of repertoire coming out of her ears. We worked together to select a mix of monophony (unison songs) and polyphonic, choral music that can paint a picture of the kinds of music one could encounter in Renaissance Prague.

What is the most challenging piece in your current repertoire?

For this program, we have a pair of pieces that are a challenge of their own. Phillippe de Monte’s Super Flumina Babylonis (By the streams of Babylon, there we sat and wept) is a magnificent work for eight-voice parts on verses of Psalm 137. The impressive motet laments the plight of Catholics under persecution in Protestant lands and was sent by the composer to English composer William Byrd, who responded by setting the subsequent verses of the psalm Quomodo Cantabimus (How shall we sing the Lord’s song in a foreign land), also for eight voices.

The challenge with these pieces comes when we place them back to back in the performance. It is a wall of sound for nearly fifteen minutes. There is a temptation among the singers to start strong vocally in Super Flumina Babylonis and sustain that all the way through the motets. They will be toast! The singers must instead craft lines that do not overpower one another and respond to the diverse melodies with carefully shaped gestures full of nuance and expressive of the venerable Latin language.

What do you want audiences to take away from this performance?

Our hope is for audience members to experience the beautiful singing of music from a focused time and place. Beyond the listening experience, we are offering some visual enhancement so concertgoers have an image to go along with their hearing. Finally, we want to demonstrate not only that there was a wide array of musical sounds in Prague but also that these diverse pieces all had different functions at the time. They are not all service music, nor are they all sung on the streets.

Many thanks to Mr. Anderson for his interesting and informative answers! Schola Antiqua will perform at the Center on Sunday, February 23 at 2 p.m. 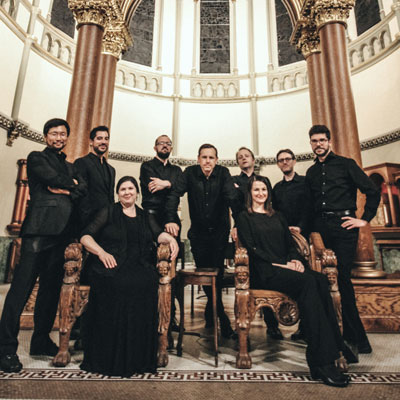